Most days, Zora Pannell works from her dining room table in the United States city of Cleveland, Ohio, sitting in front of her computer, turning off the video on Zoom calls to nurse her one-year-old daughter, Savannah.

Pannell has balanced working from home and caring for her daughter and son Timothy, aged two, since March when she started a new job as a manager for a language services company the same week that Ohio issued a “stay at home” order to stop the spread of the novel coronavirus.

Working from home is an exhausting daily juggle but she is more worried about being told it is time to return to the office. Her husband cannot watch the children during the day because he has a job at a local steel mill and the couple has been unable to find a daycare centre they deem safe and affordable close to their Shaker Heights apartment on the eastern fringe of Cleveland.

“I’ve already felt penalised for being a working mother,” said Pannell, 30, who is worried she would have to quit if she is not allowed to keep working from home. “Now it’s like I’m in purgatory.”

The pandemic upended child care plans for many parents in the US, forcing them – particularly mothers – to grapple with tough choices that are only becoming more difficult as states push return-to-work policies to try to revive the battered economy. 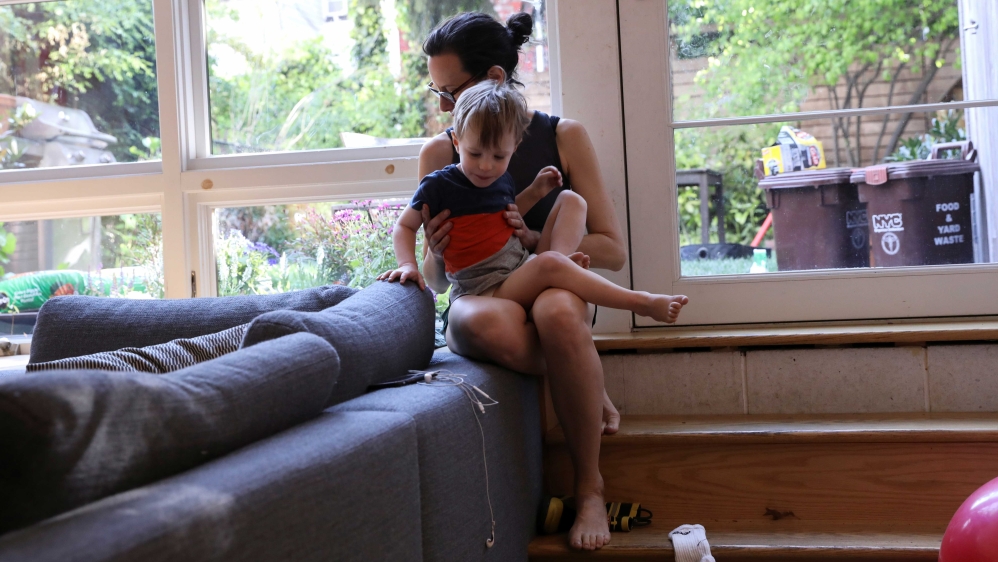 A survey by Northeastern University found that 13 percent of working parents had to resign or reduce their work hours because of a lack of child care during the health crisis, with women impacted significantly more than men [File: Caitlin Ochs/Reuters]

Do they hunt for expensive and hard-to-find child care that could expose their families to COVID-19, which is still raging across much of the country? Or do they scale back on work, or even quit, threatening their financial stability?

The barriers risk stalling or reversing the economic gains made by working women in recent years, who are more likely to take a career hit than men when they are unable to find child care, studies show.

A survey by Northeastern University found that 13 percent of working parents had to resign or reduce their work hours because of a lack of child care during the health crisis, with women affected significantly more than men. In all, of those who said they had lost a job due to child care problems, 60 percent were women, the survey found.

“If women don’t have child care, they can’t go back to work,” said Karen Schulman, Child Care and Early Learning Research Director for the National Women’s Law Center. If that does not happen, “you end up creating a system that is going to result in vast gender inequities”.

Prior to the pandemic, the labour force participation rate for women aged 25-54 touched 77 percent in February, rising from 73 percent in September 2015 and close to the peak reached in 2000, when the share of women in the labour force began to plateau, in part because of challenges accessing affordable child care, experts say.

Pressure looks certain to mount on families in the coming weeks, as various aid programmes and protections that offered relief to jobless parents expire, including enhanced unemployment benefits, eviction moratoriums and a freeze on student loan payments.

Finding a way to broaden access to child care will be pivotal to helping the US labour market heal from the economic devastation caused by the pandemic, with latest data showing the economy contracting an annualised 32.9 percent in the second quarter of 2020 and approximately one out of five workers claiming unemployment insurance in the week ending July 11. 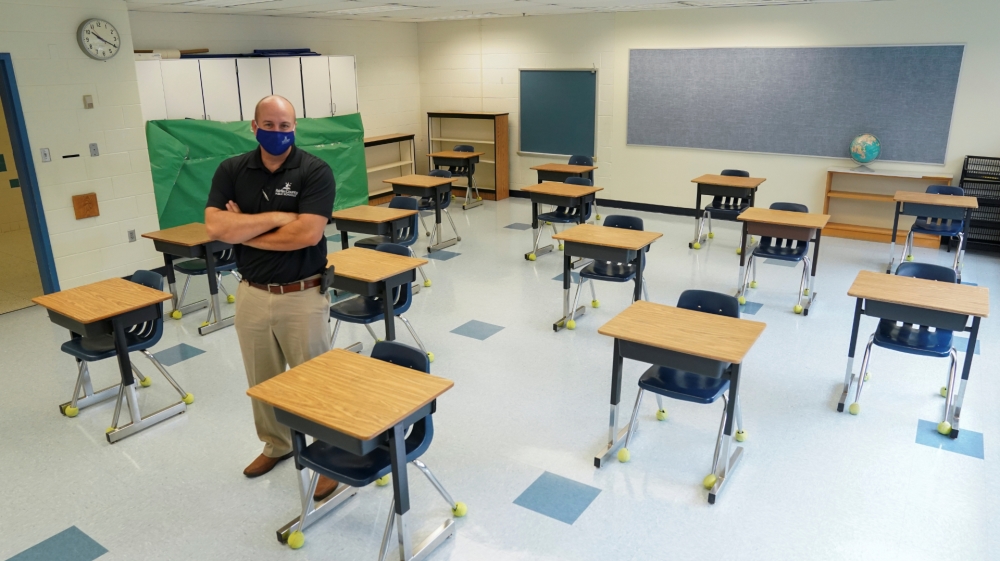 Child care was already scarce before the coronavirus led to the shuttering of thousands of centres. More than half of all Americans lived in a child care “desert” as of 2018, defined by the Center for American Progress, a liberal nonprofit group in Washington, as an area with no licensed child care providers or less than one slot for every three children under five.

Now, in many states, care centres accept only limited numbers of children to prevent the virus from spreading. Additionally, families that relied on grandparents or other older relatives or neighbours must weigh up the risks of asking for their help again and perhaps exposing them to a disease that has proved especially deadly for the elderly.

Chantel Springer, 24, worked at Starbucks in Manhattan during the early months of the pandemic but has been on furlough since June, when the store cut back on staff to adjust to lower demand and social distancing requirements. Now that her unemployment benefits could shrink as low as $325 a week, Springer is making arrangements to get back to her job as a shift manager.

“I feel like I have to work,” said Springer, explaining that the reduced benefits would not be enough to cover the rent, food, diapers and other costs.

This month, Springer transferred to a store in Brooklyn so she could be closer to her apartment and her two-year-old. But finding someone to babysit her son is a challenge. Springer can no longer leave the toddler with her mother, who recently moved to take care of a disabled sister whose husband died from COVID-19. For now, she is looking to coordinate schedules with her son’s father, who has also returned to work at a retail store.

Under the Coronavirus Aid, Relief, and Economic Security, or CARES Act, passed by the US Congress in late March, parents who lost access to child care because of the pandemic became eligible for unemployment benefits. But the process of qualifying for the programme, which varies from state to state, became less clear cut as the school year ended and some daycare centres began to reopen with limited capacity.

The Labor Department sought to clarify with guidance that parents should resort to their typical summer child care plans.

Many states, including New York, Missouri and Louisiana, allow parents to self-certify each week, under penalty of perjury, that their child care centre was closed and that they met the requirements to continue receiving benefits. Other states, like California and Texas, make such decisions on a “case-by-case” basis.

While child care places are hard to find for toddlers, they are even scarcer for school-age children and many summer programmes for this age-group went online, leaving parents facing a quandary. 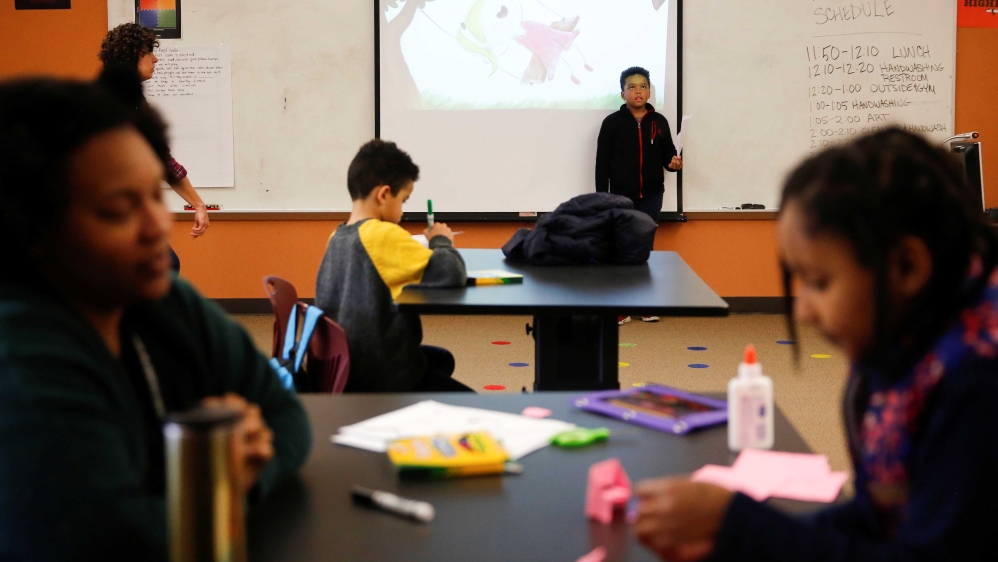 Under the CARES Act, parents who lost access to child care because of the pandemic became eligible for unemployment benefits. But the process of qualifying for the programme became less clear cut as the school year ended and some daycare centres began to reopen with limited capacity [Lindsey Wasson/Reuters]