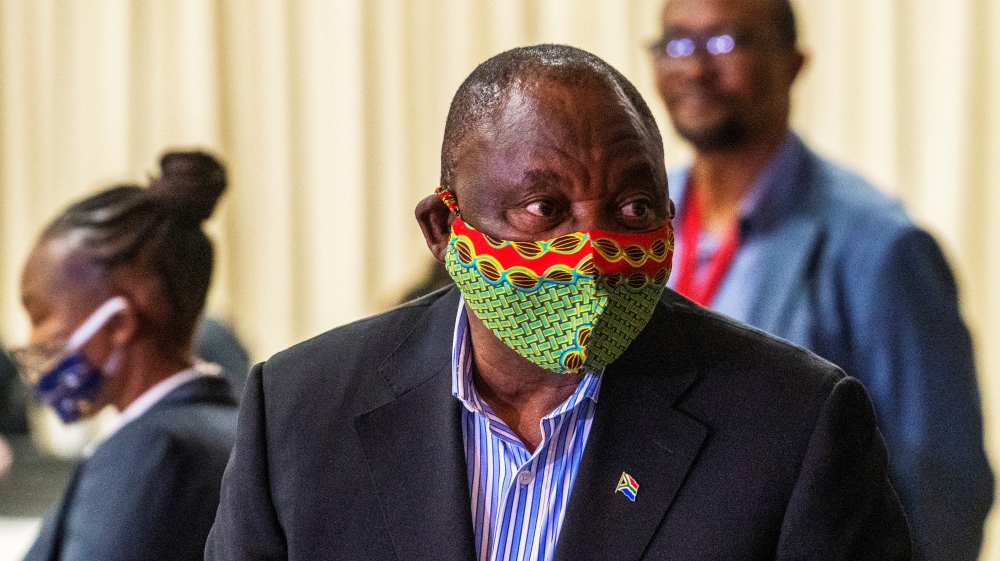 South Africa’s governing party executive has decided at a weekend meeting that party officials formally charged with corruption and other serious crimes must step aside from their posts, President Cyril Ramaphosa has said.

The African National Congress (ANC) has been buffeted in recent weeks by reports of corruption during the coronavirus crisis, with state investigators probing irregularities in government tenders worth 5 billion rands ($297m).

In a statement read out on Monday by Ramaphosa, the governing party ordered members who are formally charged with corruption to “immediately step aside from all leadership positions in the ANC, in legislatures and other government structures pending the finalisation of their cases”.

The ANC will put in place a mechanism for leaders to make regular declarations of financial interests, and guidelines will be developed on ANC leaders and their families doing business with government and public entities, added Ramaphosa, who had set up a ministerial committee to investigate alleged corruption in state tenders earlier this month.

Reports of suspect deals between government officials and businesses providing medical equipment, as well as food aid parcels to the poor, have sparked outrage in the country.

South Africa’s anti-corruption watchdog said earlier in August it was investigating irregularities in these contracts, the latest in a series of high-profile corruption scandals involving politically connected individuals.

Healthcare workers and unions say corruption is contributing to poor delivery of services and putting lives at risk.

While the government has given contracts to service providers for personal protection equipment (PPE), the prices have been inflated. In other instances, PPE has not been delivered at all or contracts have been given to companies and people connected to the government and the ANC.

The Special Investigating Unit (SUI), a government agency, said 102 companies in the province of Gauteng alone are under investigation. While in other provinces, officials have been suspended and investigations have begun, but no one has yet been charged or prosecuted.

“It’s difficult to put numbers on it because the stories are still coming out and, unfortunately, because of the lack of having good protection and preventive measures in place we may only know of the extent of the looting six or eight months down the line,” Karam Singh, head of legal and investigations at Corruption Watch, told Al Jazeera earlier in August.

Ramaphosa‘s chief spokeswoman, Khusela Diko, is also embroiled in a scandal involving her husband Thandisizwe. His company has been accused of winning a $7m contract to supply PPE through his political connections. Diko has taken special leave and she and her husband deny breaking any laws.

Stung by allegations of corruption during the COVID-19 pandemic, Ramaphosa wrote to ANC members earlier this month saying its “leaders stand accused of corruption” and that the ANC “does stand as accused number one”.

“I implore you to take responsibility without insulting our movement and its members, who have committed no crime of corruption as they sit waiting for the ever-elusive better life for all,” said Zuma in his leaked letter.

“You write, for your own desires to plead for white validation and approval,” Zuma said.

Ramaphosa said he had not yet responded to Zuma’s letter.

“I don’t even know what the reasoning [was] … and will not even publicly entertain issues that are raised in the letter,” the president said.

The ANC said the seemingly “choreographed campaign against the president will not distract the movement from undertaking and intensifying” its fight against corruption.