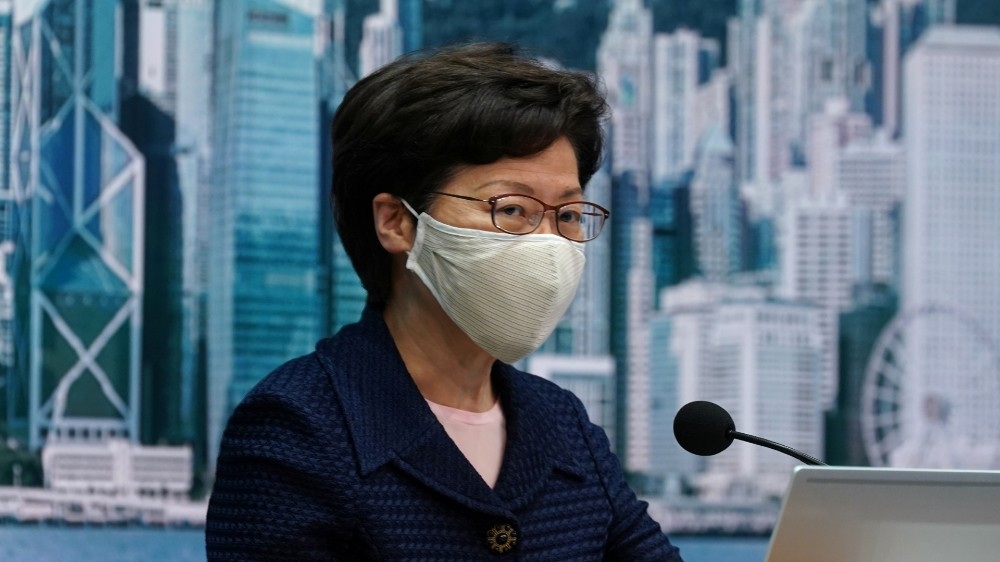 The move on Friday is seen as a setback for the pro-democracy opposition, which was hoping to capitalise on disenchantment with the current pro-Beijing majority to secure a historic majority itself.

At a news conference, Lam said the decision to delay the vote until September 5, 2021, was her “most difficult” this year but it was necessary to safeguard people’s health.

“We want to ensure fairness and public safety and health, and need to make sure the election is held in an open, fair and impartial manner. This decision is therefore essential,” added the Beijing-backed leader, noting that the Chinese government had given her full backing.

Lam said she was “only paying attention to the current pandemic situation”, denying the move was a political decision to hobble the opposition, while Beijing welcomed the postponement as “necessary, reasonable and legal”.

Before Lam’s announcement, a group of 22 lawmakers had issued a statement accusing the government of using the outbreak as an excuse to postpone the vote.

The decision comes a day after officials disqualified a dozen opposition candidates, including prominent pro-democracy activist Joshua Wong, from running in the elections.

‘Who is she trying to fool?’

The city of 7.5 million people has seen a surge in coronavirus infections since the beginning of July. Hong Kong had registered some 3,100 infections as of Thursday, more than double the tally at the start of the month.

Government critics, however, say Hong Kong has so far been able to largely contain the outbreak and point out to the more than 40 countries that have held elections in recent months despite facing a far worse outbreak than Hong Kong.

In November last year, the opposition camp secured a landslide victory in district council elections, riding on support for an anti-government protest movement triggered by a now-shelved bill that would have allowed people to be sent to mainland China for trial.

“The political parties associated with Beijing … have been saying for quite a number of weeks that they don’t think that the election should be held because they are afraid that they would lose,” said Emily Lau, chairperson of the International Affairs Committee of the Democratic Party, dismissing Lam’s justification for delaying the vote on health grounds.

“Who is she trying to fool?” Lau told Al Jazeera. “I think it’s quite laughable.”

The elections for Hong Kong’s Legislative Council, known as LegCo, were scheduled for September 6.

Only half of the 70 seats are directly elected by Hong Kong people, with 30 chosen by special interest groups who are mostly pro-Beijing and the remaining five seats occupied by popularly-elected district councillors.

The highly anticipated vote would have been the first since Beijing imposed a controversial national security law imposed on the former British colony last month stipulated that candidates who violated it would be barred from running.

Critics say the law is an attempt by China to curb dissent in Hong Kong, ushering a crackdown that spells the end of the Chinese-ruled city’s high degree of autonomy.

The Chinese and Hong Kong governments say the law will not undermine Hong Kong’s freedoms and is necessary to preserve order and prosperity after months of often-violent anti-government protests last year.

On Thursday, 12 pro-democracy candidates were barred from running in the elections for not complying with the city’s constitution or pledging allegiance to the local and national governments.

“Beyond any doubt, this is the most scandalous election ever in Hong Kong history,” Wong told reporters earlier on Friday. “I wish to emphasise that no reasonable man would think that this election ban is not politically driven,” he said.

“Beijing has staged multiple acts to prevent the opposition bloc from taking the majority in the Hong Kong legislature.”

Later on Friday, the US criticised the postponement of the vote and the disqualification of opposition candidates.

“This action undermines the democratic processes and freedoms that underpin Hong Kong’s prosperity,” the White House said in a statement.