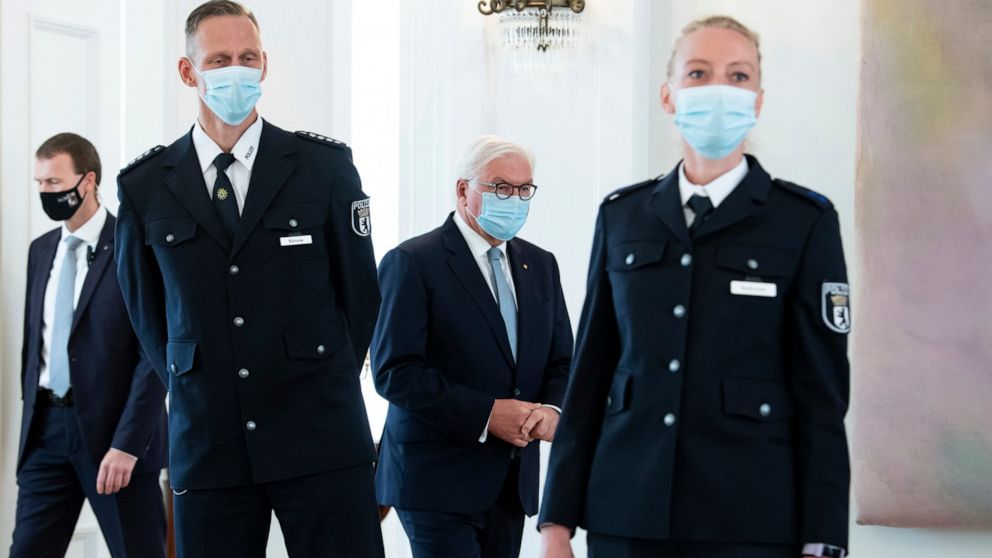 Germany’s president has condemned an attempt by far-right protesters to storm the country’s parliament building over the weekend, accusing other demonstrators who watched on of complicity with the extremists

BERLIN — Germany’s president on Monday condemned an attempt by far-right protesters to storm the country’s parliament building over the weekend, accusing other demonstrators who watched on of complicity with the extremists.

Hundreds of people who were part of a broader demonstration against the country’s pandemic restrictions breached a security barrier outside the Reichstag building late Saturday before being intercepted by police and removed.

From the steps of the building, some waved the flag of the German Reich of 1871-1918 — a favorite of the far-right in a country where the Nazi flag is banned — and other extremist banners.

The Reichstag building was burned a month after the Nazis came to power in 1933, many believe by the Nazis themselves, and the arson attack was used as an excuse to impose a crackdown on civil liberties.

Today it houses Germany’s parliament, and President Frank-Walter Steinmeier said the images of the weekend protest “rightfully frightened and outraged many people.”

“The violent riots on Saturday again made clear that right-wing extremism has deep roots in our society,” Steinmeier said after meeting with the three police officers who stood alone against the protesters until reinforcements arrived. “It is a serious danger and it is an important and ongoing task to uncover networks in the early stages in order to effectively combat it.”

Though tens of thousands of people opposed to wearing masks and other measures intended to slow the spread of the coronavirus took part in the daylong demonstration on Saturday, countrywide they are very much a minority.

Opinion polls show only one German in 10 rejects the country’s current prevention measures, such as the requirement to wear masks on public transport, in stores and in some public buildings such as libraries and schools.

Steinmeier defended the right of those protesting the coronavirus measures to demonstrate, but admonished them not to allow themselves to be co-opted by the extreme right with a different agenda.

“My understanding ends where demonstrators allow themselves to be harnessed to the carts of the enemies of democracy and the political agitators,” he said. “Those who seek cooperation with right-wing extremists on the street, but also those who simply walk without being concerned alongside neo-Nazis, xenophobes and anti-Semites, those who don’t clearly and actively separate themselves from them, make common cause with them.”

Chancellor Angela Merkel’s spokesman, Steffen Seibert, decried what he called “disgraceful pictures at the Reichstag that are not acceptable — anti-democrats trying to encroach on the steps of our democratic parliament.”

He thanked police, as well as “the overwhelming majority of the 83 million people in this country — all those who are behaving sensibly, cautiously and considerately in this pandemic, even if it isn’t always easy.”

Seibert also condemned a weekend incident in Bergisch Gladbach, near Cologne, in which Health Minister Jens Spahn was yelled at and, his ministry says, spat at by protesters against virus restrictions. Video showed Spahn appearing to offer to talk to demonstrators before giving up and getting in his car.

Geir Moulson contributed to this story.